Mzuzu, July 16, Mana: Malawi Housing Corporation (MHC) has transferred its regional officer for the north Stela Sokosa and other two management members over welfare concerns raised by staff at its Mzuzu Office.

The move came to light Thursday when deputy minister for housing Abida Mia visited Mzuzu MHC offices to address the staff on the issue after she toured housing project cites in the city.

Random interview with the workers reveled nonpayment of allowances, nonprocedural promotions and demotions inadequate support during funerals and sexual harassment, among grievances that forced them to close their bosses’ offices.

When she arrived at Mzuzu Office Mia was rocked up in a meeting for close to an hour with MHC chief executive officer Eunice Napolo and the union representatives whose outcome exposed transfer of the three bosses.

“The main issues we had here in Mzuzu is welfare. Members of staff demanded transfer for top leadership because of the same and management has agreed to move these people,” she said.

Speaking in an interview, Mia said the issues that were raised by the staff members have been resolved.

“There were some managerial issues that need to be rectified but stayed for months and eventually escalated.

We have managed to sort out the issues. Some were very minor and needed not be solved even at CEO level,” she said.

Mia said the issue of payments will first be verified by MHC office in Lilongwe. She said government is committed to constructing more houses as a way of promoting decent housing for people. 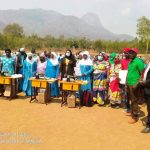