Soon after the Chief Magistrate Violet Chipawo granted bail to Chisale on Friday morning, the State prosecutor told the court that he (Chisale) will be re-arrested for the said charge.

The top Mutharika’s security aide Chisale reacted furiously saying: “It’s too much. I am a person too and I feel pain.”

Chisale, who was arrested on Monday on money laundering and fraud charges, arrived at the Court handcuffed with a Bible in his hands. 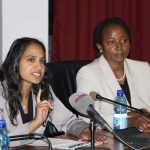