Vice President for Democratic Progressive Party (DPP) in the South, Kondwani Nankhumwa has defended his use of Biblical verses at political rallies, saying the tendency was part of his person and cannot be separated from him.

He said he had learnt with dismay that some critics were questioning his repeated reference to the Bible whenever he takes to the podium, challenging that his background motivates him to turn to the word of God.

Nankhumwa said he was always encouraged to cite verses from the Bible because of the scriptures in Romans Chapter 1 verse 16.

He said just like the Police and Army have Chaplains who provide spiritual guidance to soldiers, it was necessary for politicians to turn to God in good and rough times, citing 1 Samuel 17; saying: “Just like the time David was facing Goliath, he had to seek God’s intervention to win the battle.

“Similarly, the period we are going through, we need God more than ever,” Nankhumwa who is Minister of Agriculture, Irrigation and Water Development was speaking at Chikwawa Community Centre Ground when President Prof. Peter Mutharika launched the Shire Valley Transformation Programme.

Nankhumwa assured the DPP leadership that he is and has always been a staunch member of the party.

“There’s no way I can rebel against the party that has taken from dust to glory. Your Excellency, I will be here because it is your prerogative to maintain me in your cabinet,” The Minister affirmed.

He expressed that some people within the party were making up stories that he had joined opposition forces such as Malawi Congress Party (MCP) and United Transformation Movement (UTM) to extent that some were circulating false audio clips to solidify their claims to that effect.

“It was a pity that some of the people fabricating such stories are from the national governing council of DPP,” Nankhumwa lamented, calling for unity of purpose from both DPP and United Democratic Front (UDF) supporters,” Nankhumwa stated.

In his reaction, Mutharika said he was aware that some people within the DPP were resisting alliance with the UDF, noting that there was enough room in the party’s tent to accommodate all who wanted to contribute towards national building.

“I have been reliably informed that some quarters within the DPP are not happy with the UDF joining us in our efforts to development the country, but whether you like or not; this union will be there until 2084,” he declared.

Member of Parliament for Chikwawa North, Owen Chomanika said the DPP has huge support in the district, owing to the fact that the party was living by its manifesto propagated during the campaign period.

“During campaign towards 2019 May 21 elections, we were calling on people to vote for the people-centered manifesto which continues to manifest in the introduction of such projects like the Shire Valley Transformation Programme,” he said.

Nankhumwa is on record to have asked DPP and UDF supporters during a joint rally the two parties held at Njamba Freedom Park to seek God intervention in their undertakings ahead of the May 19 fresh presidential elections.  He drew his inspiration from Psalms 127.

Last year, in June, he called on DPP followers at the same venue during a victory rally to conduct special thanksgiving prayers following the party’s triumph at the May 21 Tripartite Elections quoting Psalms 124. 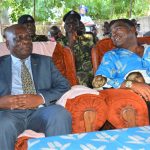 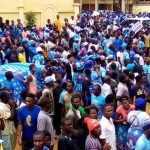 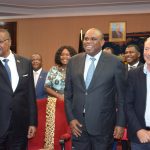