The faculty of commerce at the Malawi Polytechnic in Blantyre has launched the society of student for banking and finance (SSOBAF) in a bid to bring about visibility and ethical development among the prospective employers and the students in the banking and financing sectors.

Launching the student society in Blantyre, the acting dean of faculty of commerce and patron for the students Augustine Chimthenga hinted on the need for the banking and financing sectors in the country to have ethical and hard working employees from the colleges in the country.

“We have recently witnessed an escalating levels of ethical and moral decadence among the new recruits in the banking and financial sectors. Therefore, we want this society to be an exceptional.

“We want also our students to learn from those who are in the fields by upholding the morals and ethics,” said Chimthenga, who was also the former acting chairman for National Bank of Malawi.

Guest of honour at the launch, the chief executive officer (CEO) for Nico Life and Pensions plc Eric Chapola said vibrant leadership was the only recipe for effective society.

“The caliber of leadership will determine the movement of the society. If they take advantage of this to start violating the other people’s rights then their association will be brought down,” said Chapola

The CEO also advised the students on unrealistic high expectations that they have whenever they join the corporate world.

Chapola said many students lose jobs because of using short cuts in an effort to get rich quickly.

“The new recruits they expect to get poshy vehicles, mansions and live luxurious life in a short time. Therefore, they start following the easy to get rich routes such as stealing which eventually, lose their jobs,” said Chapola

The outgoing president for the Association Daires Sulamoyo said the society started in 2017 as a cohort for the newly launched banking and finance course at the college.

“It was difficult for the employers to recognize us. So we thought of introducing the society as a link between students and the prospective employers,” said Sulamoyo

According to Sulamoyo, the society will, among other things, promote efficiency and the flow of information among the finance and banking sector in the country.

He also advised the society to work as a team in order to achieve its objective. 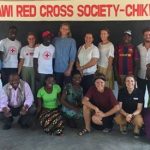 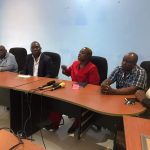