By Mc Donald Chapalapata, a Contributor

The school, located in Lisasadzi area in Kasungu has a current enrollment of 1,112 pupils of which 589 are boys and 523 are girls.

Limbe Leaf has been investing in the school since 2017 to facelift the rural primary school to be one of the model schools in Kasungu district.

Among others, a Library was built in the 2017 season worth K27.5million and stocked with curricular and literal books in 2018 for use by the school and the surrounding community.

In 2019 renovation works were done to the headmaster’s office worth K26.7 million. In 2020 a 2-classroom block worth K68.8 million has been refurbished and furnished with 120 desks worth K13 million.

Handing over the 2-classroom block and the 120 desks, Limbe Leaf Director of Corporate Affairs Febbie Chikungwa said through the Company’s Agricultural Labor Practices (ALP) and Corporate Social Responsibility (CSR) programs, Kanjoka was one of the schools identified to benefit from projects that address issues of child labour.

“By providing a conducive learning environment, it is a proven fact that more children enroll and remain in school instead of the fields where they could be exposed to child labour working in fields. As a company we strongly oppose children working in tobacco fields,” said Chikungwa.

She noted that the solar installation to the library in 2019/20 has had a profound effect on the school and the community at large saying since Kanjoka Primary School is located in an area with limited and minimal access to electricity, students from the community have been able to come and study after hours leading to some students from the surrounding community day secondary school who were using the library at night to qualify for university education.

“All Limbe Leaf CSR projects currently focus on promotion of livelihoods through multiple sources of income and strict adherence to labour practices.  Some of the company’s projects to complement the ALP program include: provision of safe water, support for women groups, support of grassroot sports, primary education infrastructure and learning materials and sponsorship for university students. Through the Company’s ALP program, projects that promote primary education are central as evidenced by what we have done for Kanjoka Primary School,” said Chikungwa.

Asked about the future of tobacco in Malawi, Chikungwa said, as long as Malawi produces a compliant and traceable crop, in a sustainable manner, there is a great future for Malawi tobacco. She said that is why, to ensure compliance, among other initiatives, adherence to labour practices on tobacco farms is one of Limbe Leaf’s priority.

Speaking when she received the donation on behalf of the government, Minister of Education Agness NyaLonje thanked Limbe Leaf for transforming Kanjoka primary school to a model school in Kasungu District.

“We are grateful to Limbe Leaf for supporting governments efforts in providing quality education to its citizens and what you have done here by transforming this primary school is very commendable. As a Ministry, we are looking at a permanent pupil-classroom ratio. We need to get it to 60 pupils per classroom. For this school, Limbe Leaf has greatly contributed to the attainment of that ratio. We would like other companies to emulate what you have done,” said NyaLonje. 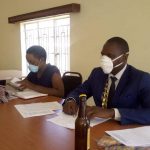