Acts Of Kindness Deserve To Be Seen-Gwamba

Lilongwe, May 26, Mana: One of the country’s big names in Hip-hop gospel artist, Gwamba has said that acts of kindness are supposed to remain exposed in order to be seen and inspire other people particularly the youth to develop the spirit of kindness.

He made these remarks recently in Lilongwe, in an interview with Malawi News Agency (Mana) in response to the charity work which he wants to carry out in Lilongwe City on Saturday, May 29, 2021, aimed at supporting street kids and physically challenged people begging in the city’ streets.

The musician has decided to embark on this initiative as one way of fulfilling the word of God.

“As Christians, the gospel of God is not only about preaching like the way we do in the music and Facebook but we need to practice what we preach, hence as a gospel artist, I decided to come up with something that would fulfil the gospel,” Gwamba said.

Asked about the public opinions on the initiative which some say the artist was not supposed to publicize his charity deeds as it would be like showing off,  the Singer said that he opted to put his forthcoming charity work programme on public in order to inspire youth in a positive way.

“There was a time I used to drink alcohol and smoke and the youth used to look at that, now that I am a different Gwamba from the one that people knew, I want my new character to impact the youth in a very positive way.

“It is funny that the time when I was a bad example no one had a problem with it and now all over sudden when I posted that I want to give, some people are saying that I am showing off yet when I was posting about alcohol and other bad things no one talked about it.

“Even in the bible, Jesus performed miracles in public in order for public to see and that was not showing off. Acts of kindness deserve to be seen and be on camera, when someone captures stupid things people do not have problem, but when good things have been captured everyone has a problem and I do not understand why,” he said.

Gwamba urged the public to develop the spirit of supporting the needy with the little they have saying that it does not need millions amount of money to assist the underprivileged.

One of his fans, Henry Daudi commended Gwamba for his upcoming charity work saying that the initiative portrays his good spirit.

“The hand that gives is the hand that is blessed, keep it up Mr. Gwamba for your initiative and that is very good spirit and God will bless you abundantly,” he stated. 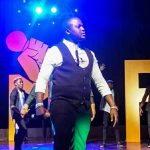