Mzuzu, April 8, Mana: Mzuzu Senior Resident Magistrate, Peter Kandulu has discarded an application by lawyer Christon Ghambi to discharge his client Mzomera Ngwira and six others in a case of violence due to the state’s failure to bring a witness in contrast to the court’s order.

Ghambi argued that when the court adjourned the case on March 17, 2021, it ordered the state to complete parading its witnesses in the next hearing.

However, the state failed to do so as it only brought one out of the remaining two witnesses to testify in the case.

He said the state lacked seriousness as it failed to produce documents to prove that it summoned the witness to come to court accusing it of failure to abide by a court order.

On its part, the state said it failed to bring the witness who is a police officer, because he is on interdiction and had travelled to Zomba.

It further argued that posting away of some officers who were pursuing the matter also affected the process of bringing forth the witness.

The state further said it was not true that it was not committed towards completion of the case as it managed to bring forth a witness from Lilongwe besides the other fourteen witnesses it brought before the court in the previous hearings.

In his determination, Kandulu said the application was valid but said he would give the state one more chance to bring the witness on grounds that the case is of public interest as it is political in nature and that the state might re-start the case which would be inconveniencing to the accused persons.

He further said the state had made an effort to bring a total of fifteen witnesses before the court.

Kandulu then gave the state last chance to bring the witness or else the application will be validated. 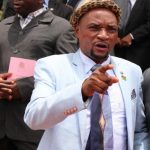