Mzuzu, March 11, Mana: The country’s Vice-President, Dr. Saulos Chilima, has advised Malawians to avoid spreading misconceptions and false massages about the Corona Virus Vaccine which he said can negatively impact on its administration.

Chilima was speaking at Mzuzu Central Hospital when he launched the vaccine’s roll out in Northern Region where he also got inoculated.

“The coming in of this vaccine in the country should be embraced and accepted by all of us, as you might have noted that we have lost many Malawians to this pandemic (COVID-19).

“We believe that this vaccine is another step that we have taken to scale up the fight against the pandemic,” said Chilima.

He said people should stop believing in some myths and destructive information currently being spread regarding the vaccine by some sections of the society as the vaccine has gone through all relevant processes under the supervision of qualified personnel.

“Let me point out that as government, we know that there are some quarters which are alleging this vaccine is a satanic initiative. This is a mere myth which has no substance at all.

“Before we accepted this vaccine, it had to go through a rigorous process by scientists who then recommended that it is really a reliable vaccine that will greatly help in fighting this disease,” said the Vice-President.

Chilima said the fact that he and the State President, Lazarus Chakwera have been the first people to get the jab, demonstrates that the vaccine is reliable and therefore called all Malawians to emulate the gesture.

Deputy Minister of Health, Chrissy Kalamula Kanyasho said Malawians should celebrate the coming in of the vaccine as it will go a long way in fighting the virus.

“As we are celebrating the launch of this vaccine in the country, let me take this opportunity to urge all Malawians to continue following all the recommended guidelines in the fight against the pandemic.

“The vaccine is neither the end in itself nor of the disease, but it’s one of those steps that government is employing to combat the disease. Let us continue observing social distance, masking up and washing hands,” said Kanyasho.

Last week, Malawi received its first consignment of 360,000 doses of Astra Zeneca Vaccine, which is a vaccine against COVID-19.

About twenty people who included the academia, religious, political and traditional leaders were also inoculated. 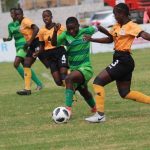 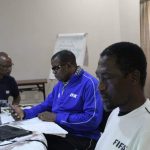