At 19 and standing not more than 1.5 metres blossoming music sensation, Eli Njuchi is not a giant.

But the transformation that his art is making him achieve is so huge that the giants in the music game and away from it have recognized his increasing presence.

His magic and genius was testified on Sunday afternoon at Robin’s Park in Blantyre when he unveiled his album, The Book of Eli.

The giant Robin’s Park venue was sold out and the atmosphere inside and outside the hall, where other patrons who could not find space inside sat, was infectious.

The euphoria that those present were experiencing spilled over to the social media.

People expressed their awe in the manner the budding star had gripped the moment.

Fellow musicians, art commentators and ordinary music lovers poured out their admiration and respect for the artist.

Hip hop artist, Gwamba posted on his Facebook page: “The future is here! Eli Njuchi.” His message was accompanied by hands up emojis.

The genius of Eli Njuchi spilled over to the office of Speaker of Parliament, Catherine Gotani Hara who has since bought the album at K100, 000.00

“This young man needs our support. He will take Malawi to the world of music,” Hara wrote.

Such was how the magic of the Zitaye hit maker swept across on Sunday.

Inside the fully parked hall there were continuous chants and patrons witnessed the moment that a star was born.

The patronage was a mixture of both the young and the old.

He performed a number of his songs such as Phone and the recently released Honest including a touching conversation he had with his father when he was leaving Lilongwe coming to Blantyre at the onset of his music career.

Among other highlights of the launch was the presence of rapper Charisma, who has been voted as best live Hip Hop act in the inaugural Malawi Hip Hop Music Awards on Sunday evening.

His performance underlined he was accorded the accolade.

Other performers on the day included Hayze Engolah, Classick who did his new song Water.

The Malawian artist had sent the patrons wild with his antics on stage before he did Ragga. 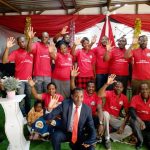 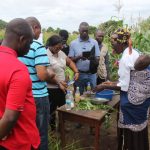