Miss Malawi 2002 Blandina Khondowe, born Blandina Mlenga has passed on. Apart from best known for her role as Miss Malawi 2002, she is also the founder of Think Pink – Malawi campaign for breast cancer awareness.

She advocated for breast cancer awareness and speaks about the lack of facilities and access to equitable management.

Starting in 2013, she began partnering with local companies and local NGOs to create awareness for breast cancer in the country.

Inside sources indicate that she was rushed to the hospital after she collapsed at home.

Blandina, born in 1980, was first diagnosed with breast cancer in 2013, which she later overcame only to be diagnosed again in 2017.

Following her diagnosis and later survival, she became a passionate breast cancer advocate through the two initiatives she founded – Think Pink Malawi (in 2013) and later, Hope for Cancer Foundation (in 2015).

Funeral arrangements are yet to be made.The former beauty queen is survived by a husband and two children.

She also initiated the annual national Think Pink Walk with Magdelena Zgamvo in 2014 which promotes early detection of breast cancer.

Khondowe attended the University of Malawi and has a bachelor’s degree in business marketing from Charles Sturt University and an MBA from a University of Wales Institute.

At the time of her death, she was serving as Principal Tourism Officer in the Ministry of Tourism. She continued to judge for the Miss Malawi pageant and other beauty pageantry. 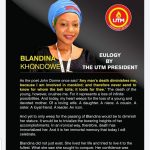 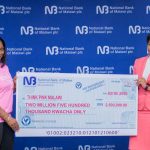