In an interview on Thursday in Blantyre, he said he was inspired by his childhood and what he and his siblings went through being sons of a teacher, his mother.

“My mom was a retired primary school teacher and looking at the complaints teachers have been advancing of late and remembering the life we led as children of a teacher, I thought of coming up with this 5-minute piece hoping for a change,” Chiwamba explained.

The Poem highlights a retired teacher’s life and it reveals the challenges teachers face and how as a country looked down on teaching as a profession.

He lamented on how most teachers live in pathetic houses as one of the challenges but continue to do their work in shaping other children’s future.

In recent year’s teachers across the country held demonstrations against the government on a number of issues ranging from long standing salary arrears, low salaries and poor working conditions.

This year, Chiwamba has released four poems saying he had saved the energy for his 4th album set to be released next year.

Being his ninth year since the start of his career, Chiwamba said he has released over 150 poems.

He started writing and reciting poems to the public since 2011.

Chiwamba intends to release his poems on line through sapitwapoetry.com website. 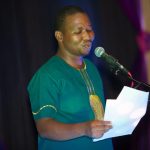