Ministry of Health employees have petitioned the Minister of Health to either transfer or fire Director in the Department of HIV and AIDS-DHA, Rose Nyirenda for abusing her office and victimizing her juniors.

It is alleged that Nyirenda, who has been with the department for close to four years now, has been victimizing her subordinates since her arrival from Mzuzu Central Hospital in 2016.

A letter which is in circulation purportedly authored by the concerned employees alleges that upon her arrival at the Department Nyirenda started transferring drivers and other junior staff for her own personal reasons.

It further alleges that she transferred nine drivers and only remained with one who she brought from Mzuzu hospital a Mr. Misinde.

“She didn’t stop at transferring nine drivers but also started victimizing other workers which demonized most of them.

She abuses her office by turning government employees into her personal domestic workers making them perform her personal and domestic errands,” reads the letter in part.

It further reads; “Her behavior has made the standards of work go down at the department.”

Meanwhile, the employees are asking for intervention of the Ministry, the Anti Corruption Bureau -ACB as well as the office of the Ombudsman.

It is further alleged that Nyirenda refuses interns sent by the government to work with the department, instead she accommodates her friends children coming and milking huge amount of allowances.

Further Nyirenda allegedly does not trust her Malawian counterparts to work with, but a Germany Nationality who gives her MK500, 000 every month by the name Prof. Andreas John, as a reward of keeping his contract with the department.

One of the victimized employees (Name Withheld) alleged that despite several complaints to authorities on Nyirenda’s conduct no action has been taken on her because she is untouchable following rumors that she was going out with former Minister of Health.

“Our hope lies in the Tonse government to rescue us from this woman. Enough is enough; we can’t keep working under her cruelty. Not with a new government in place.

We   challenge the ACB and Ombudsman to make their investigations to our complaints and take action on her,” Said the Victim 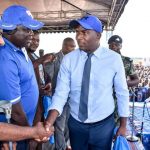 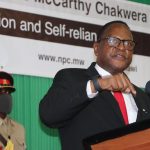 Time To Walk The Talk – Chakwera