Lest we forget Paramount Holdings connived with immediate past ruling Democratic Progressive Party (DPP)officials and Cabinet ministers to supply 74 ambulances whose initial request was 300.

Paramount Holdings paid MK 300 million kwacha in advance to these unscrupulous officials in order to clinch the multibillion-kwacha deal that was initially given to a South African based firm Vision International.

“After the move to award the business to a bogus firm, the then Minister of Health Atupele Muluzi was under pressure to cancel the deal on the pretext of lack of funding when in fact the then Finance Minister Goodall Gondwe had set aside taxpayers’ money for the same purpose.

Since the move was exposed, the influential DPP officials did not want to completely loose out, instead they forced the former President Peter Mutharika to replace the minister by bringing in Jappie Mhango and the tender was re-advertised this time less at 74 ambulances, ’he said.

According to our source at Plant Vehicle Hire Organization (PVHO) who pleaded that we conceal his identities for the sake of his own safety and was part of the technical evaluation team that also travelled all the way to South Africa and Dubai to make to physical evaluation of the bidders capacity to supply, revealed that  Mhango’s first assignment at the Health ministry was to ensure that this deal materializes come what may!

“A high profile and powerful individual at State House demanded an upfront payment of MK 300-million-kwacha cash from Paramount Holdings which they paid as a they say the rest is history, they got the deal,” said the source.

As to why the same company that supplied the 74 ambulances failed to clinch the controversial 35 Landcruiser bid that was awarded to another foreign company this time Zambian based company, the source said Paramount failed to meet some of the technical aspects of the procurement bid.

“Like as I said, Paramount Holdings’ was carried at the back by the previous DPP regime therefore some of the technical specifications were ignored otherwise the deal was also going to Grandview had it been that rules and regulations were not bent in favour of them hence their failure to build from their being the previous suppliers of the ambulances to the ministry recently,’’

According to the source it seems Malawians are overly misinformed about the whole process of procurement of ambulance.

“Contrary to the way Human Rights Defenders Coalition (HRDC) are portraying what the Malawi Government through the ministry of health is not affordable Landcruiser ambulances have modified features this is where all our so called local suppliers got it wrong go back and read what the ministry of health spokesperson Joshua Malango is saying you will get a closer to reality pictures of the whole story,’’ he said.

According to our independent investigations most of deals Paramount Holdings has won from government are not entirely based on merit but rather kickbacks.

Oops!Paramount Holdings Returns…Getting Closer to the Botched 35 Ministry of Health Ambulances added by Malawi Voice on September 19, 2020
View all posts by Malawi Voice → 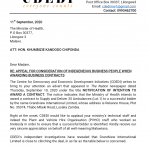