Chitipa Registers Over 250 Child Marriages Due to Covid-19

Chitipa, August 28, Mana: A total of 269 child marriages with 37 teen pregnancies have been registered in Chitipa District following the closure of all learning institutions due to Covid-19 pandemic.

This was disclosed during an interaction between Minister of Gender, Children and Social Welfare, Patricia Kaliati and traditional leaders in the district.

Speaking during the meeting, director of administration for Chitipa District Council, John Baluti said Traditional Authority (T/A) Nthalire is the most affected area with 80 child marriages followed by T/A Mwenewenya with 63 cases.

‘‘Nthalire, which is the hardest to reach area in Chitipa has more child marriages, and the most worrisome development is that out of  the 80 marriages, 68 are young girls with ages between 12 to 17,’’ said Baluti.

He however, said currently nine girls have been withdrawn from marriages by some traditional leaders.

In her remarks, Kaliati expressed shock over the development, saying that it is pathetic to note that Malawian girls are getting married at tender ages, a malpractice which she said hinders them from continuing with education.

‘‘I have told the chiefs, who are the custodians of our culture to dissolve these marriages, because as government we would like to have a society with people who are well educated, people who are well informed, and are able to make decisions to support themselves to earn a living.

‘It is only through that when we can reduce some of the diseases like fistula, cancer as well as malnutrition among young women,” said Kaliati.

She said the tendency calls for concerted efforts and responsibility for it to be addressed once and for all.

Kaliati added that her ministry is ready to support women and children who face any form of abuse, by providing them with lawyers for court lawsuits.

Before the meeting, Kaliati toured a piggery cooperative in Kapoka which is one of the initiatives being implemented under Social Cash Transfer Program. 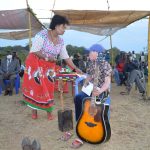 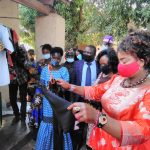 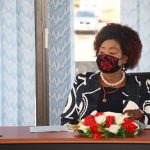