Tonse Administration to Set Up Welfare Fund For Artists

Blantyre, August 18, Mana: Government plans to set up Welfare Fund to help artists in the country as one way of recognizing their contribution to the country’s development process after being sidelined for years.

Minister of Tourism, Wildlife and Culture, Michael Usi made the remarks Monday during the funeral ceremony of veteran comedian, Elson Soko, popularly known as Anyoni who was laid to rest at the Henry Henderson Institute (HHI) Cemetery.

Noting that the basic purpose of the fund was to provide financial support to needy artists, he said artists are a valuable part of society.

Usi said many of the artists have rendered enormous services for the promotion of art and helped create a good image of the country, saying, “it was our responsibility to look after the artists in time of need.”

He said the purpose of the welfare fund would be to help the artists and their families.

The Minister pointed out that the Welfare Fund would be set up to provide financial support to the artists who are inactive due to old age, adverse health conditions or otherwise incapacitated due to accident or disease.

“It was a pity that an artist will get sick but getting no support from the nation. These people die like a person who never contributed anything to the country. It is time with the Tonse-led Government that we will start respecting these artists with this welfare fund,” Usi stated.

Artists have welcomed government’s decision, saying artists in the country live on hand-to-mouth.

Eric Mabedi of Kwathu Drama Group, popularly known as ‘Jakobo’  said acting was one of the most difficult professions in the world, noting that artists make people happy and relaxed with their performances as such deserve better.

“This news was long-awaited. How many artists have died poor despite working hard? This is timely and it will help artists a lot especially when they are sick and need medical attention,” he noted.

Mabedi said the initiative would create a breathing space for artists to develop into their full potential.

“This initiative will go a long way towards recognizing the often uncertain and infrequent income artists make, especially in early years and their important contribution to the culture and tradition of the country,” he added. 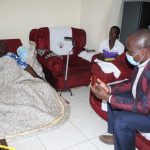