She made the remarks on Monday in Machinga during a tour of Mobile Vocational Skills activities conducted by Development Aid from People to People (DAPP) which has equipped 60 out-of-school girls with tailoring skills in the area of Senior Chief Kapoloma in the district.

Kaliati said government remains committed to empower women economically, saying poor access to income among women is one of the factors that fuels GBV in the country.

She expressed gratitude for the efforts some Non-Governmental Organisations (NGOs) such as DAPP were making to encourage the girl-child to become be self-reliant.

“Government appreciates DAPP for complementing government efforts to uplift lives of the youth in the country through various programmes including technical and vocational skills.

“Most of these girls are young and dropped out of school for various reasons.

As such, I would like to request them and their parents to go back to school as they will be able to buy some school necessities through tailoring skills they have acquired,” the Minister said.

Kaliati said government would provide the necessary support so that girls continue with their studies.

“We will include parents of girls who left school due to financial problems on social cash transfer so that they can ably support their children to go back to school,” she added.

Kaliati urged women to encourage the girl-child to go to school, saying most of the GBV is encouraged by lack of income among women which was necessitated by school dropout and early marriages.

“When a wife is educated the couple respects each other unlike in a situation whereby the woman did not go far with education. If we want to win the fight against GBV we have to send the girl-child to school,” she said.

The Minister appealed to DAPP to expand the same mobile vocational training in all districts so that more girls benefit from the initiative.

DAPP Vocational School and Programmes Manager, Augustus Kaliati said mobile vocational training has reached out to 290 girls in the country.

He said it costs DAPP at least K24 million to mount the tailoring training and purchase sewing machines for the students as a start-up package after the four month training.

“I would like to request government to consider giving out loans to these girls under the Malawi Enterprise Development Fund so that they can engage in meaningful tailoring business to become economically independent.

“I believe that this was in line with government commitment of creating one million jobs. On our part, we will continue working with government to uplift the lives of the people,” Kaliati said.

One of the beneficiaries, Jamira Mofolo said she would be able to support herself because she has been equipped with tailoring skills which is a source of income, adding that they would assist fellow girls who did not benefit from the tailoring training.

“I had no hope that one day I will do anything sensible but thanks to DAPP for equipping me with skills and materials so that I should become a full tailor.

I dropped out of school because of poverty but with the Ministers’ encouragement, I will go back to school and will be doing tailoring after classes and during weekends,” she added.

DAPP was instituted in 1995 and it has equipped 10,500 youth with various technical and vocational skills. 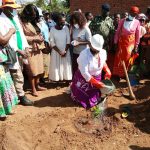 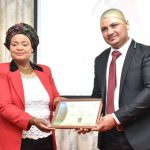 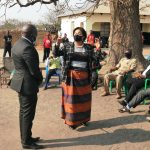