Local Government and Rural Development Deputy Minister, Grezelder Jeffrey on Monday laid a foundation stone for the construction of Kapiri Market and a Bus Depot in Mchinji North East Constituency worth about K1.6 billion.

The project, which is expected to be completed in June 2021, is being funded by Malawi Government.

Speaking during the launch, Jeffrey said government was committed to developing rural areas to reduce urbanisation in the country.

“This project will also help to create jobs and business opportunities for young people,” she said.

The deputy minister said the market would house five sheds and five blocks that will have 40 shops.

In her remarks, Member of Parliament (MP) for the area, Esther Majaza hailed government for the project, saying the infrastructure will help boost the district’s economy through revenue collection.

Majaza, who is also Deputy Minister of Irrigation and Water Development, said currently, Mchinji District Council was not doing well in revenue collection.

“Apart from boosting revenue generation for the district, the two facilities will also change the face of Mchinji,” she said.

DEC Construction Project Manager, Eladi Malonda assured the communities that the project would be completed in time and that it would be of high quality.-MANA 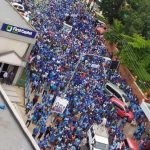 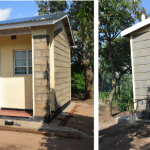