Minister of Local Government and Rural Development Dr Ben Phiri has expressed satisfaction with progress on the construction of Thyolo-Khonjeni Station road and Mphanje market, which he said once completed will facilitate business operations in the district.

Dr Phiri said this in Thyolo on Friday when he made tour to the 14 kilometre road and the market which will cost K10 billion and K1 billion respectively.

The Minister said both contractors were doing a good job with top quality work despite meeting some challenges but was quick to say that they needed to catch up with deadlines as government was taking the two projects seriously.

“There is clear evidence that good road networking and access to market is a catalyst for social economic development hence coming up with this road which connects to the railway line for easy transportation of farm produce such as tea among others.

“I must also say that the contractor will also construct bus depot right there at the market. Government is doing all these to facilitate trade that in turn will benefit Malawi because this will be a permanent route that business people will use,” said Phiri.

The Minister further said government will soon establish a Police unit in the area in order to safeguard business operations that will come as a result of good road and conducive market environment.

He added, “the two projects are taking place within my constituency, Thyolo Central, hence I thought it would be wise to visit these projects and see their progress.

Sub Traditional Authority (STA) Maganiza has since commended government for the projects, saying the surrounding community will benefit much as long as they will put the road and the market to good use.

“I am extremely happy with the coming of the developments in my area. This is no mean achievement and I urge my subjects to make use of the road and the market to facilitate their businesses operations.

“Even before the completion of these projects, people are already benefiting because they have created jobs,” she said.

Mphanje Market is scheduled to be handed over to government by August 2020 while Thyolo-Khonjeni road construction will run for two phases of 7 kilometres each.-Mana 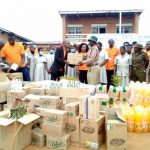 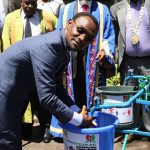