Justice Dr. Ansah made the revelations on Wednesday when she was responding to a question from Parliament Public Appointment Committee (PAC).

She said MCP’s CEO Mkaka, Lawyer Ayuba James and Member of Parliament Richard Chimwendo Banda intimidated her not to announce results  for the 21 May Presidential polls or face blood-shed.

“There was a delegation from MCP that included Hon. Mkaka, they came to see me and the first thing that they did was to intimidate me. They said through a lawyer Ayuba, that if the results were to be announced there will be blood.

The same intimidation was made by Hon. Richard Chimwendo but later they withdrew,” revealed Justice Ansah

PAC has been conducting the inquiry since Monday with MEC Commissioners following ConCourt verdict which nullified the presidential poll.

The court also ordered PAC to assess the competence of the commissioners to hold fresh elections. 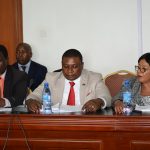 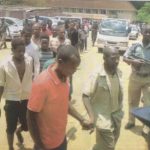 One Response to "MCP Wanted to Kill Me- Ansah"