Malawi to Have National Draughts League

Draughts Association of Malawi (DAM) has plans to establish the National Draughts League in order to promote the sport in the country.

In an interview on Thursday, DAM Secretary, Suzgo Nkhoma said the sport is active only in Southern Region where there is a regional league to the tune of K1 million from a group of people in the region. The tournament runs for six months.

“We want the regional leagues to culminate into the national league. Remember, we are doing this to keep our athletes in form and shape ready for national games annually,” he added.

He said the African Championship in July this year (2020) and the 2021 World Championship competitions need local players to be in shape for them to perform better.

The DAM secretary further urged regions to have regional leagues in order to keep their teams and athletes in good shape, saying the biggest tournaments were coming.

Commenting on the matter, Northern Region Draught Association Chairperson, Westone Kayange, said the idea of having a National Draught League was viable and that his regional chapter was pleased with the plan.

“We are geared for the national league if the plan to introduce it comes to reality. We will start draughts this month (February) at district level, then there after regional level,” said Kayange.

“Meanwhile, we don’t have sponsors who can help us to have regional draught tournament, but we are optimistic that before February ends, the regional league will be on,” he added.

Kayange appealed with the government to come in and help the Draught Association of Malawi to have a national league like in football and netball. 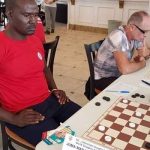